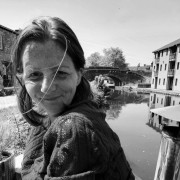 Wind turbines and off-grid narrowboats- yes, wind turbines can be tricky! The great and gentle whooshing of blades tower over the odd green hill and windy salt sea flat. Even close up, they make only a discreet sound. At first glimpse one appears grey from a distance, then in a trick of the light, turns like magic to white. We pass beneath the looming ghostlike apparition of a windmill under shadow of cloud, glanced as we cruise at a casual motorway speed. The silence is an almost eerie contrast with the ancient noise and smog of gone by industries churning out their filthy quotas.

As sequenced and disciplined as dancers- Swan Lake dressed in white, these Goliaths stand poised with perfect grace, a great readied group- a team all turned into the wind. They stand In unison of lofty swishing blades slicing through fresh air and all towards one goal. Yet again and again, with an assertive power, this mechanical clockwork engineering swipes the blue sky with his momentous and deliberate arms. A pair of lovebirds fly close, but not so near as to be knocked from their tiny airborne, lace like skeleton wings, as lead shot to the ground. Oblivious to the danger of those infantile arms, the fowl fly past with a gambler’s luck, for on this rare occasion they win.

The vast wind generator farm, sits far out to sea in the distance across Morecambe Bay. It’s just visible on a clear day, but often hidden in the thick of a seated fog. Recently extended, this is now the world’s second largest windfarm, standing just off Walney Island, near Barrow-In-Furness. Hornsea One, just off Yorkshire’s east coast, earns the title of largest wind farm- It’s as big as the island of Malta! Here, one hundred and seventy four mega-wats powers one million homes. A single rotation of one windmill’s blade generates enough electricity to power one home for a whole day.

Passing boaters grumble as they have to manoeuvre around the leviathan camp, like wooden ships of old avoiding the hidden perils of jagged rocks, buried in the dangerous shallows. But unlike God given rocks, these windmills and their turbines are an unnatural placement of considerable inconvenience! To the sea navigator, it has become three nautical miles- as radar and compasses go wild. The turbulence, some say, can turn you off course. With a 50 metre clearance, these wind farms can force small yachts to join heavy shipping lanes. Windfarm working boats, tides, fog and poor weather, all add to the risks too. But no accidents have been declared as yet.

Not on my doorstep!

Heysham One and Two, 1970s built power stations, warm the waters of Morecambe’s Westerly end, luring in friendly seals and a very occasional lone whale who wandered far off course. Letting go their hissing pressure valves, these power houses spew great steaming clouds into the salt sea air, to cool their advanced gas-cooled reactors. These risen steam clouds ride upon the inward sea breeze until they bump into Coniston Old Man and the dark mauve shadows of the fells that fringe the Southern Lake District. Here these hidden condensating clouds fall with the drizzle; it often rains in the lake district.

An area of great natural beauty, when the sun at last… breaks through the ominous grey sky, it lights up a colour palette, a scene of clarity to be captured and held by artist and walker alike. The slow corrosion of Heysham’s reactors will lead to an eventual decommission after only four decades. Yet the radioactive waste buried deep beneath the seabed will take a further 1000-10,000 years to decay, toxicity diluted as it one day… re-incarnated… returns to its original natural raw state of mined ore.

I remember walking with my Dad in the lake district fells, past blue slate quarry and white stone built walls. A small child following in the great footsteps of Wainwright. His small books were collected, and not just displayed on our bookcase, but used and enjoyed as Wainwright himself would have wanted. Of course there were no windmills dominating the hills back then. I wonder if my Dad passed on to me his engineering interests and his love of walking- now manifest in me; through wind turbines and off-grid narrowboats- a unique and rural lifestyle. I think he would have liked our boat if he were still here.

Wainwright’s drawings- artist’s sketchbooks; simple, rough etchings of his routes over the rugged hills. They were simple maps and descriptions, leading us with aching leg muscles, through sodden bogs and up dry scree, into the troughs and on up to the very peaks of the slopes. And with a yearning to see what was over that summit urging me on; the dramatic view never disappointed me, neither our accomplishment. My Father’s camera, even a Pentax, never truly captured or replaced that tranquil moment that seized and held my gaze. The mere photographs were boring… distant, and all looked green alike. I guess photography wasn’t his craft.

Most walks ended at the pub. My Dad always had a beer… or two- I think these were his happiest moments! Sometimes we were left to follow a map down overgrown pathways, hoping to find my Dad in the pub at the end. My Mum once turned out for one such walk, much to our laughter, in her slippers; but my Dad was cross! She often carried our peeled off coats uphill like a laden packhorse, while my sister sulked far behind- all the way up the arduous climb. We sat at the top of such a sunlit heavenly zenith, on an Easter Sunday, sharing spiced hot cross buns.

Wind turbines and off-grid narrowboats- what could go wrong?

On our small narrow boat, the bemused dog walker stops and looks up. A chatter of family out for the day. The “Morning, t-windmills goin fast intit!” of a local; and curious boaters alike pass by. They often pause to stare at the little windmill mounted upon our boat roof. Not so majestic as the great blades of it’s significantly bigger brothers, but more like a child’s toy! It spins furiously, turning into the wind not with grace but in a temper.

Held up by four taught, thin steel cables; the windmill is padded between pole and roof with a thick wad of foam. This micro turbine would otherwise hammer like the feet of a traumatised toddler in a tantrum upon our steel boat top. Such vibration upon the cold metal comes with an intolerable noise; indeed, it would drive you quite insane beneath! People pause and ask questions in raised accent. Fathers of young children stare transfixed, surprised at the sight of a windmill on a boat roof. Shouted comments caught in the tail end of the wind, drop away… as boats sail by. Inquisitive men shouting over the noise of their hammering boat engine.

No windmills for ancient Babylon!

“How much electricity does your windmill make? Volts…? Noise reduction…? Meters…? Connection?”- The questions fly over my head! I pass such 800 watt queries to my husband, with no faith in my learning of physics. But now this shameful laziness motivates me to want to find my own answers. Long have we harnessed the wind to help us pump water or grind grain. First mentioned in the reign of Hammurabi of the Babylonian Empire, 539 BC (Babylon now known as Kuwait and Iraq). Hammurabi suggested the idea of harnessing the power of the wind to irrigate his crops. There is no evidence he completed his mission however, many others went on to progress his idea, and so I feel, I should know something about this engineering fete by now! With our very own windmill- I’m intrigued.

The lift and drag of air pressure across the blades of a windmill is how they move. The lift is stronger than the drag so this is how the wind pushes on the blades that then turn. The generator, added later to make what’s known as a wind turbine, then turns this spinning Kinetic force, into electricity. Some wind turbines even have gears and breaks- like a bike I guess. The gears change the effort dependent on the size of the wheel. Slowing the windmill down, using a higher gear is useful for strong gusts. Too fierce a wind causes the blades to bend back at the ends. This warps them, causing wobble, inefficiency and noise.

Have you ever wondered why large turbines don’t appear to be moving on very windy days? They shut off at 50- 60 mph, so they don’t tear themselves apart. So why don’t they always turn on those gentler windy days? This is because the National Grid does not have the battery technology to store sudden large dumps of electricity. So when demand is low the windmills are turned off. I was surprised to learn that Scotland produces enough energy from its wind, to power two Scotland’s. So why are Scots still paying for their electricity? That is the problem with knowledge- it just results in more questions!

But all I am really interested in is, can our little wind powered generator keep my fridge cool all night, or on a gloomy wet day? With the help of a lithium battery, and a rotor on its mount which is so quiet inside our boat- thankfully Lord, I can hardly hear it: The sound goes unnoticed, and yes, my raw milk is ice cold! But if we depend solely upon our three solar panels, then when the sun slips behind the clouds, the electricity is gobbled as quick as a feast to a hoard of ravenous men. Switching off our fridge is an inconvenience met with a groan, as we resort to a cool box out on deck. Then after sunset we meagrely put out the lamps and light candles to breach the gap.

So our windmill whirls and whirs around as extravagantly as it wants. It is as free as an abundant wind will allow, throughout the long nights and beneath winter’s dark. The fridge stays cold and the battery bank stays full. Our greedy batteries take their fill of wintry squalls, charge our mobile internet, power my electric toothbrush… most modern conveniences restored- (except the toaster). The boat sways a little in the gusts. Periodically, the turbine blades need a little straightening. Or the rotor requires a little oil to ensure it turns into the breeze. With minimal cost… and a little know how (because we bought a Chinese turbine!) we have our status quo, true equilibrium.

Would you dance with a windy giant?

The best of wind turbines and off-grid narrowboats?- Most wintering boats slip behind the shelter of tall, bare hedges. We instead embrace the view of windy valleys. We dodge the shadows of trees that limit the sun’s short time and solar reach. The joy is in being off-grid! Here, there are no more bruising bills; those weighty bricks that each month hang around the neck, which can sink even the strongest swimmer. On our meagre boat we need less and have sufficient.

Here there are no inconvenient power-cuts. Outside an English gale howls, and laden rivers plunge towns into darkness. Internet friends relinquish their games, and the working day?… rudely interrupted. There are no hidden clouds of pollution, no contamination, no years of buried toxic waste. The wind can be mean too, but here it is a wild beast harnessed- a gift- a treasure! Then, the only noise on our boat roof is my feet tap, tap dancing, with the billowing of my dress, and the breeze in my wild knotted hair. As the windmills and their turbines are turning, they are oxygen liberating!… to a bound and fragile world.

How to Live Off-Grid on a Narrow Boat & Love your Lifestyle!

A Limestone Quarry and a Slap in the Face